The game scenario states that a realtor shows a buyer seven houses in a single day, which initially suggests a Basic Linear setup. But the scenario continues on to create a second variable set: the general times of day each house will be shown. This creates an Advanced Linear game, but one made much easier because the times of day row is completely predetermined:

PT68_Game_#1_setup_diagram 1.png (6.51 KiB) Viewed 1165 times
In the setup above, in the time row, “M” stands for morning, “A” stands for afternoon, and “E” stands for evening. Normally, there would be a possible confusion over the “M” for morning and the “M” for the specific house, but since all of the times are set, the possibility of confusion is significantly reduced.

With the basic structure in place, let us now turn to the rules.

The first rule limits J to the evening, and thus J must be sixth or seventh. This can be shown with a J split option on six and seven. You can also choose to show J Not Laws on the first five positions, or to not show them. If you choose not to show them, do not forget that J cannot be in those positions. For emphasis, we will show them on the diagram, but the choice is yours—many good test takers would forgo showing the Not Laws in order to save a few seconds:

PT68_Game_#1_setup_diagram 2.png (8.02 KiB) Viewed 1165 times
The second rule eliminates K from being shown first or second, which can be shown with Not Laws:

PT68_Game_#1_setup_diagram 4.png (10.08 KiB) Viewed 1165 times
As you can see, the first and second showings are becoming somewhat restricted. However, the situation becomes more limited as the implications of the third rule are further considered.

PT68_Game_#1_setup_diagram 6.png (11.91 KiB) Viewed 1165 times
While the above diagram reveals all of the Not Laws in play in the game, we can also draw some inferences about the placement of certain variables. First, both the first and second showings have J, K, M, and L eliminated, leaving only N, O, and P to fill both showings. Thus, if any one of N, O, or P is shown elsewhere, the remaining two must be shown first and second (this helps solve question #5). This can be shown on the diagram using parentheses (or a block, if you prefer):

PT68_Game_#1_setup_diagram 8.png (2.14 KiB) Viewed 1165 times
While this could be shown on the diagram using split options (as with J being shown sixth and seventh), be careful with that presentation as it might mistakenly lead you to conclude that K or L is shown fourth, as in the following representation:

PT68_Game_#1_setup_diagram 10.png (2.16 KiB) Viewed 1165 times
A different way to represent these two inferences is to consider the functional result of the two inferences: the third, fourth, and fifth showings are occupied by K, L, and one other variable. This could be shown on the diagram using a parenthetical presentation:

PT68_Game_#1_setup_diagram 11.png (1.86 KiB) Viewed 1165 times
We’ll use this final representation in our main diagram for this game, which is presented next. Note that in our main diagram, we will not show N, O, and P as randoms since they are tied so closely to the morning showings. 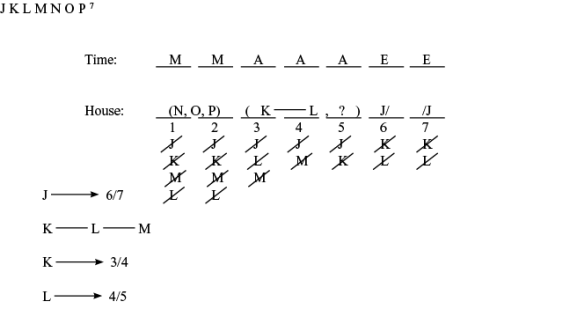