This is a Grouping: Defined-Moving, Unbalanced: Overloaded, Numerical Distributions, Identify the Templates game.

This game requires that we select five colored threads out of available six, and assign each of the five threads to one of three rugs. The rugs can be represented as three functionally identical groups (R), as none of the rules apply to specific rugs. To keep track of the unassigned colored thread, we need to create an “Unused” group (U), as shown below:

The scenario indicates that each rug is either solid or multicolored, suggesting that the minimum number of thread colors per rug is one. Although the maximum is not initially pre-determined, there are only two ways to distribute five variables into three groups:
Note that these distributions are unfixed, as the three groups are functionally identical to each other. Since they create two separate scenarios in the game, it makes sense to create basic diagrams for each option. Each diagram will likely provide a considerable amount of information, which is why a Template-based approach will probably be sufficient. Indeed, Numerical Distributions often lead to setting up the game with Templates. Remember, however, that the “five-into-three” distribution only pertains to five of the six colored threads. The “Unused” group is a useful reminder that there is always one unassigned colored thread, as shown below:

The second rule establishes a conditional relationship between O and P:

These inferences are shown below: 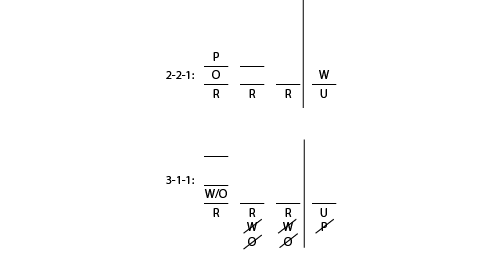 PT74 - Game_#3_setup_diagram 8.png (4.05 KiB) Viewed 2876 times
The last three rules are all negative Grouping rules, and each eliminates a pair of variables from appearing in the same rug:

PT74 - Game_#3_setup_diagram 9.png (2.06 KiB) Viewed 2876 times
These rules have an important implication to the 2-2-1 distribution. To prevent F and T from appearing in the same rug, we need to ensure that Y appears in one of the two multicolored rugs (via the Hurdle the Uncertainty principle):

The final diagram for the game should look like this: 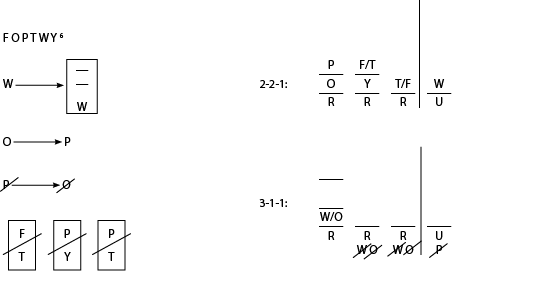 PT74 - Game_#3_setup_diagram 11.png (7.84 KiB) Viewed 2876 times
The open-ended nature of the 3-1-1 distribution may be troubling for some test-takers who crave a higher level of certainty in their original setup. One possible approach would be to examine the entire range of possible solutions based on which thread color is not used. However, this would require the creation of five additional templates, as any one of the thread colors (except for P) could end up in the “not used” group. This is a situation where the cost of template-creation probably outweighs the benefits.

This is a multi-group grouping game, unbalanced, overloaded, partially defined. Wow, that was a mouthful. So what does that mean?

Basically grouping games are either straight-up selection games, in which you are choosing what should go in one group, or they are multi-group scenarios, in which you have to assign variables to multiple possible groups. This game is the latter scenario: we are assigning colors to three rugs.

What else do we know? We have six threads available, but only five are used. This means that we have an "unbalanced, overloaded" game. We have more colors available than are used in the rugs. One will always be left out. Further, each color used will be used exactly once. This means that the variables are defined. There is no ambiguity about how many times the variables will be used (if they are used).

However, the number of colors in each rug is only partially defined. The rugs must have at least one of the colors but may have more (if they are multicolored). There is a "distribution" element to this game: what are the possible arrangements of colors to rugs? Well, it seems as though we could have three on one and one on each of the other two, or we could have two colors on two and one with exactly one. This gives the game a 3-1-1 or 2-2-1 distribution.

Now I encourage you to work through the game! Consider what I have written, and make sure that you pick out the aspects of the game that led to my description. You must understand this setup on your own to be prepared to deal with a similar situation on the actual test.

You've got it! The only comment I'd make is that I would diagram "In any rug in which white is used, two other colors are also used" as "W

However, if you understand "W

2 colors" to mean that there are 2 other colors, then that works too!

Still confused on why there are only 2 numerical distributions for this game. why couldn't you have a 1-2-2 or a 2-1-1? really confused on this part about the game. Would love to have a bit of clarity on this.

Good question! The explanation above notes that the 3:1:1 and 2:2:1 numerical distributions shown are "unfixed," meaning they include all of the placement options if the rugs were laying side-by-side. (A fixed distribution means, in contrast, that for 3:1:1, a certain, identified rug has three.)

In other words, an unfixed 3:1:1 includes the possibility of placements that look like: 3:1:1, 1:3:1, and 1:1:3. But for this game it was not important to differentiate among the rugs with a label, so it was okay to leave the distribution unfixed.