This is a Grouping/Linear Combination, Numerical Distribution game.

This game asks us to assign each of six sections to one of three consecutive aisles. Because the aisles have an inherent order, our initial setup for the game should appear as follows:

The first rule requires R to be located in the same aisle as either F or M. Given the horizontal orientation of our setup, we need to use a vertical block to indicate identicalness or similarity:

oct12_game_3_diagram_2.png (1.7 KiB) Viewed 2712 times
The second rule establishes that F is located on a lower-number aisle than both M and P. Since our aisles are numbered from 1 (lowest) to 3 (highest) with numbers increasing to the right, the sequence should place M and P to the right of F:

oct12_game_3_diagram_4.png (2.26 KiB) Viewed 2712 times
The third rule creates another sequence:
This sequence adds an S Not Law to the diagram (we already have P as a Not Law from the second rule):

oct12_game_3_diagram_5.png (2.53 KiB) Viewed 2712 times
Additionally, because both the second and the third rules contain P, they can be linked together to create a super-sequence:

oct12_game_3_diagram_7.png (1.4 KiB) Viewed 2712 times
You should immediately turn this rule into a positive statement: if S cannot be in a lower-numbered aisle than H, it logically follows that S must either be located in the same aisle as H (i.e. aisle 1 or 2), or else be in a higher-numbered aisle than H:

oct12_game_3_diagram_10.png (2.81 KiB) Viewed 2712 times
While this sequence produces a number of Not Laws, it does not allow us to place any of the five variables in a particular aisle. Additionally, the vertical block is not as helpful as we would normally expect, because R’s placement relative to the rest of the variables is unknown. Finally, a closer inspection of the three Numerical Distributions reveals that only one of them (2-2-2) is sufficiently defined, which we discuss in question #15. Despite the distributions, the game is not sufficiently restricted to allow for a Templates-based approach. Thus, our final diagram looks like this: 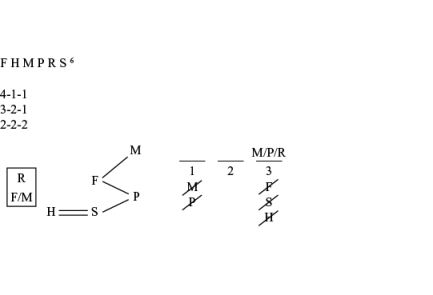 oct12_game_3_diagram_11.png (9.54 KiB) Viewed 2712 times
Do not let the loosely-defined nature of this setup concern you: a quick glance at the questions reveals that the vast majority of them are Local, and as such further limit the range of possible solutions. The only Global question is question #16.