The game scenario establishes that five movies are being shown at a theater during the course of a single evening. The five movies are each shown once, on one of three separate screens—screens 1, 2, and 3. Next, the test makers specify a tricky lineup of movie show times: screens 1 and 2 show two movies, each at 7 and 9, and screen 3 shows one move at 8. This is clearly a Linear element. How you use this element to set the game up then has a significant impact on how difficult you find this game.

There are several possible angles from which to set up this game, and they all revolve around choosing a base for the game. The first base that could be used is all five movie times, which would create a linear base of 7-7-8-9-9 (the movie screens are then another row above the times, filled in with the screen number 1-2-3-1-2). However, this approach is inefficient because the repetition of the 7s and 9s would increase the likelihood of error (in a typical setup you want to avoid repeating any base element if at all possible).

PT70 -Game_#3_setup_diagram 1.png (2.01 KiB) Viewed 1475 times
This setup is problematic because it does not sufficiently capture the Linear aspect of the movie times, and test takers will have to slow down to determine the relationship between times.

The last approach is the best because it combines elements of both approaches above. First, a linear base of the movie times is used, with each time shown just once (7-8-9). Next, the movie screens are stacked above the base, with one row for each screen, creating an Advanced Linear setup:

PT70 -Game_#3_setup_diagram 2.png (2.76 KiB) Viewed 1475 times
This setup capture both the screens as well as the linear aspect of the times. However, because there are only five movies, only five of these slots are available, and four of the screen/time slots must be eliminated. This can be done by placing either an E (for “empty”) or X variable (which we will use) over those slots to indicate that they are unavailable, leading to the initial setup from just the game scenario:

The first rule is sequential, and establishes that W begins before H begins:

PT70 -Game_#3_setup_diagram 4.png (922 Bytes) Viewed 1475 times
This relationship can also be represented on the diagram via Not Laws underneath the base:

PT70 -Game_#3_setup_diagram 7.png (5.59 KiB) Viewed 1475 times
Because there are only five movies being shown, eliminating just two movies from contention starts to restrict some of the movie show times on certain screens. For example, the 7 P.M. showing on screen 2 can only be M, S, or W (since H and R have been eliminated). Similarly, the 9 P.M. showing on screen 2 can only be H, M, or S, (since R and W have been eliminated). These could be shown as triple-options on each space, but only do so after considering the remaining rule, in case further restrictions are revealed.

PT70 -Game_#3_setup_diagram 8.png (2.18 KiB) Viewed 1475 times
Operationally, no inference can be drawn from this rule until the variables are placed, but note that since H appears in both the first and fourth rules, there is a connection between the two that in solving some of the questions.

There are no randoms in the game, and by adding the triple-options mentioned earlier, we arrive at the final diagram: 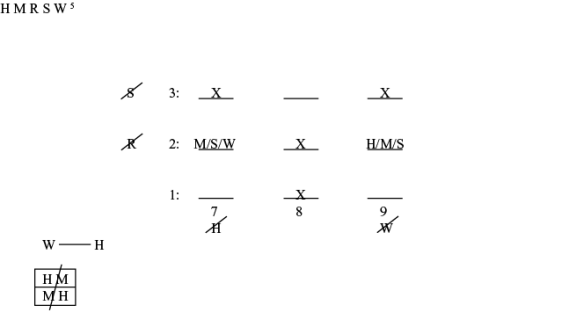 josheli
Wed Mar 19, 2014 10:16 am | Post #2
-  Wed Mar 19, 2014 10:16 am #14410
I struggled with the setup of this game. I found it difficult to find those strong inferences and I ended up answering the majority of the questions by testing them out individually, which took a long time to do. May someone please help me with the setup of game and point out the key inferences?

This is an Advanced Linear game. You can use the screens (1, 2, 3) as your base and then stack the times (7, 8, 9) above them. Since screens 1 & 2 don't have showings at 8pm, you can X out those slots on your diagram. You can also X out the 7pm and 9pm slots on screen 3, since that screen only has one 8pm showing. This will give you 5 remaining slots for your 5 movies.

The second and third rules are fairly straightforward. Show them using Not Laws.

The final rule can be diagrammed with a couple of Not Blocks, showing that you can't have H above M or M above H.

There aren't a ton of complicated inferences here but it is important to make sure you have a clear diagram with a complete set of Not Laws.

As you're going through the questions, think about how the rules interact with one another and what happens to the other variables once you've placed some of them. The H/M rule ends up popping up a lot. Whenever you place some variables on your mini-diagrams, you need to make sure that you're not forcing H and M onto the same screen.

... I was just wondering if in the case of the horror film playing at 9, isn't it true the western could be shown either at 7 or at 8? And so it's not always true that knowing the time of one gives away the time of the other?

Maybe this is a minor point, but thought I should ask.


if one of W or H is shown at 8 P.M., then the show time of the other movie is known