The game scenario establishes that six books will be discussed over the course of six consecutive weeks, one book per week. The base should be the weeks, due to the inherent order of this variable set. Additionally, we need to determine which of the six books are summarized (at least one must be). Whether a book is summarized or not constitutes a second variable set, one that should be stacked above the base. This strategy makes sense, because we need to keep track of two distinctly different attributes for each week: which book is being discussed, and whether or not that book is summarized. Additionally, the order in which the books are being discussed affects whether or not they are summarized (see, e.g. first rule). This sort of relationship between the two variable sets is unique to Advanced Linear games, and is best represented using a stacked setup.

Some test-takers would understandably interpret the summarizing aspect of the game as adding a grouping dimension to it, and therefore create a two-value grouping base. This is a mistake. Having two separate diagrams—one keeping track of the order in which the books are discussed, and another one splitting the books into two separate groups—would not take into account the relationship between the sequencing and the grouping elements in the game. It would be cumbersome, for instance, to represent the first rule if these elements are being tracked separately. Last, but not least, make sure to always read through the rules before deciding on a particular setup, especially if you believe that there are multiple ways of organizing the information presented in the scenario.

With that in mind, your initial setup should look like this:

The first rule applies only to the top stack, and deserves a closer look. The rule establishes that no two books that are summarized are discussed in consecutive weeks. In other words, if we have two consecutively discussed books, they cannot both be summarized. To represent this rule visually, a simple SS Not-Block applicable to the top stack is all we need:

PT71_D13 LG Explanations_Game #3_setup_diagram 2.png (2.15 KiB) Viewed 2136 times
Additionally, note that the top stack entails a two-value system (books are either summarized or not summarized). So, if any book is summarized, we would immediately know that any books immediately adjacent to it are not summarized:

PT71_D13 LG Explanations_Game #3_setup_diagram 3.png (2.03 KiB) Viewed 2136 times
The second rule is the trickiest rule in this game, if not on the entire test: it involves both a negative sufficient condition and a double necessary condition. As such, it deserves a closer look (we’ll show the “summarized” reference with a subscript “S”). The rule establishes that there are two necessary conditions that must be satisfied if N is not summarized: R is summarized, and T is summarized. Thus, the proper diagram for this statement is:

PT71_D13 LG Explanations_Game #3_setup_diagram 4.png (2.27 KiB) Viewed 2136 times
It is worth noting that the rule does not prevent all three of N, R, and T from being summarized! For instance, if N is summarized, we know nothing about whether R or T is summarized: to conclude otherwise would be a Mistaken Negation. However, if either one of the necessary conditions is not met, then the sufficient condition cannot be met either. In other words, if either R or T is not summarized, then N must be summarized:

PT71_D13 LG Explanations_Game #3_setup_diagram 5.png (2.46 KiB) Viewed 2136 times
Note that in the contrapositive, the “and” in the necessary condition is changed to “or.” According to the contrapositive, if either member of the pair is not summarized, then the other member of that pair must be summarized. In other words:
The third and fourth rules establish the following sequencing relationships:

PT71_D13 LG Explanations_Game #3_setup_diagram 6.png (3.43 KiB) Viewed 2136 times
You should immediately notice that these rules can be combined to create the following super-sequence:

PT71_D13 LG Explanations_Game #3_setup_diagram 7.png (3 KiB) Viewed 2136 times
As with any sequencing game, representing all the Not Laws that result from this chain would be a mistake (there are 24 of them). Instead, let’s examine what must be true, given the incredibly restrictive nature of the rules. Since each of the six books being discussed takes part in the super-sequence sequence, we can easily infer that O must be discussed fourth: three books must be discussed earlier than O, and two books must be discussed later than O. Thus, O divides the linear setup in two separate sections:

PT71_D13 LG Explanations_Game #3_setup_diagram 8.png (6.14 KiB) Viewed 2136 times
Now that we have a solid grasp of the sequence in which the six books are discussed, let’s return to the rules governing the order in which the books are summarized. A few key deductions can be made:

PT71_D13 LG Explanations_Game #3_setup_diagram 11.png (3.19 KiB) Viewed 2136 times
From the contrapositive of this relationship, we can infer that whenever K is summarized, R is not summarized, forcing N to be summarized:

PT71_D13 LG Explanations_Game #3_setup_diagram 12.png (1.28 KiB) Viewed 2136 times
Rest assured that most test-takers failed to spot either of these inferences, which was OK—they played a minor role in attacking the questions. Nevertheless, your ability to make them shows a level of engagement with the rules that will doubtless be helpful later on.

The final diagram for the game should look like this: 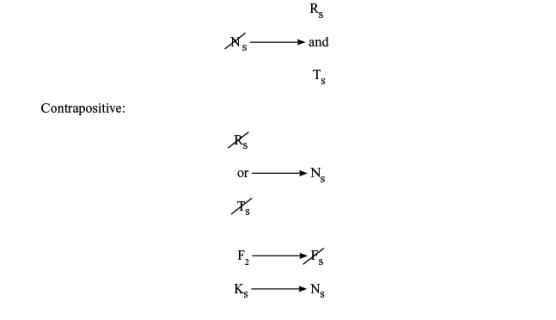 This is a great explanation but there's one part that's really throwing me off and that's the 2nd rule. So my initial setup for this was fine, but I'm not understanding the inferences that are being made. My interpretation of this rule is:

Whenever you have a conditional rule that says is something does not happen then something else must happen, you get an inference that at least one of those two thing has to happen. Imagine this simple example in the real world:

If I do not study, then I will fail the test

That's this diagram and contrapositive:

I have to either study or fail. Maybe I will study AND fail, but it cannot be true that I don't study AND I don't fail. At least one of these conditions MUST happen, maybe both. We can diagram this with a special version of the double-not arrow, if you like it (as I do):

This diagram can be read simply as "must have at least one". Looked at another way, it means that the two things on either side of the arrow (not study and not fail) cannot both occur.

The same thing happens in this game - if N is not summarized, then R and T must be. That gives us two of those double-not arrows, like so:

It cannot be true that neither N nor R is summarized, because as soon as one is not, the other must be. Same with N and T.

That F/N inference is based on F being in 2nd position. If it is, and if was summarized, both N and T would have to be NOT summarized. But, per our double-not-arrows above, at least one of N and T must be summarized, so that cannot happen. If F is 2nd, it has to be one of the ones that is not summarized, so that either N or T or both could be.

Take another look at those relationships between N, R and T, and see if the logic behind the double-not-arrows makes sense to you. If not, try a solution where NONE of them is summarized. Can you do it without violating a rule? If not, then you know that inference is a good one!

Good luck, have some fun with it!
Adam M. Tyson
PowerScore LSAT, GRE, ACT and SAT Instructor
Follow me on Twitter at https://twitter.com/LSATadam

Thankyou for your explanation, it helped a lot. So can this be a good rule to automatically do double not arrows when both the sufficient conditions are crossed out?

automatically, without hesitation or the need to draw any contrapositives (or even to draw that original diagram), gives you this:

B (and as discussed, this means that you must have at least one of A or B, and possibly both)

The other, which is more common, is when the sufficient condition is in positive form and the necessary condition is negated, like so:

This one should automatically be converted to this:

and it means that you can have just one, or just the other, or neither, but you can never have both. One in forces the other out, so both in is impossible.

These shortcuts can be very helpful, especially on those "in/out" grouping games where some variables may not be included in a given solution (like 8 people applying for jobs with only 5 of them getting jobs).

Watch for that difference between positive and negative in the sufficient and necessary conditions and see if the double-not-arrow shortcut does you some good. Good luck, keep at it!
Adam M. Tyson
PowerScore LSAT, GRE, ACT and SAT Instructor
Follow me on Twitter at https://twitter.com/LSATadam