This is a Pure Sequencing game.

The game scenario establishes that seven librarians are scheduled for desk duty for one week—Monday through Saturday. Except for Saturday when two librarians must be on duty, there are no ties. The following linear scenario underpins the sequence:

June15_game_3_diagram_1.png (4.08 KiB) Viewed 3138 times
Although Pure Sequencing games involve relationships that are relative and not precisely fixed, a linear diagram can help us represent inferences that could result from the application of the rules.

June15_game_3_diagram_8.png (3.96 KiB) Viewed 3138 times
The implications of the contrapositive deserve a closer look. If L is not on duty on Saturday, then the two librarians on Saturday must be G and Z:

June15_game_3_diagram_9.png (4.23 KiB) Viewed 3138 times
Since L must be scheduled earlier than F, and H must be earlier than L (first rule), the placement of H, L and F is now completely determined: 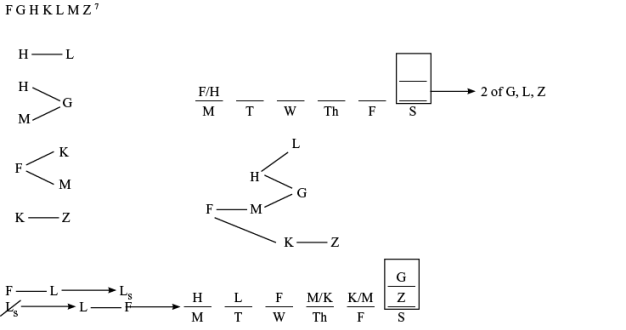 I hope that helps clear thing up!
Adam M. Tyson
PowerScore LSAT, GRE, ACT and SAT Instructor
Follow me on Twitter at https://twitter.com/LSATadam

I did everything else with the diagram correctly per the explanation (including the diagram for the implications of the contrapositive), but because of the nature of the conditional relationship I just diagrammed the rule as
L

Is there something that I was overlooking in my analysis of that, or is that functionally correct in working with the conditional?

Mon Apr 01, 2019 4:02 pm | Post #5
-  Mon Apr 01, 2019 4:02 pm #63837
That approach works in this case, az305203! While most conditional rules allow for three possibilities - the original claim, the contrapositive, and the often overlooked situation where the sufficient condition does not occur and the necessary condition occurs anyway - in this instance that third possibility is out. There is no way for L to be on Saturday AND for F to not be before L. They can't tie, and there is no place to go that is after Saturday. So, it IS a double arrow relationship! Either F is before L and L is on Saturday, or F is NOT before L (and is therefore after it) and L is not Saturday. Both conditions occur, or neither does. Perfect!
Adam M. Tyson
PowerScore LSAT, GRE, ACT and SAT Instructor
Follow me on Twitter at https://twitter.com/LSATadam

There's nothing about the last rule in particular that forces G and Z on Saturday. It's just the operation of the rest of the sequence.

In order for a librarian to be on Saturday, on one can be before that variable.

That only leaves three options for the two slots on Saturday: G, L, and Z. Once one of them is not on Saturday, the other two must be in order to fill it up.

The last rule and contrapositive are logically identical, so whichever is easiest for you to understand is fine to write out.