We received the following question from a student. An instructor will respond below! Thanks!

To give you a specific example of what Dave means, the most pertinent example of a circular game scenario where it could be advantageous to depict the mirrored versions of a "block rule" (a rule stating two variables must be arranged consecutively) is the fourth game on the October 2003 exam, which arranges 8 seats around a table. The third rule in that game states, "Ingrid sits immediately next to, and immediately clockwise from, Olivia." On the right side of the diagrammed circle, O will appear just above the position in which I appears. On the left side of the diagrammed circle, O will appear just below the position in which I appears. Notice this "mirroring" diagramming is required because of the fact that O and I's positions relative to one another are fixed, and the fixed placement looks different on different sides of the circle.

If the rule dispensed with the "immediately clockwise from" requirement, the position of the two variables would not be relatively fixed, and you wouldn't need the mirroring form of diagramming.

There have been so few disclosed circular games in the history of the test that this "OI" block rule is the only instance I've uncovered of a "block rule" where mirroring was necessary to capture the implication of the block relationship. Are there other wordings of the rule that are possible? Yes. In the game above, imagine the seats had been numbered 1 through 8. A rule that said, "Ingrid sits immediately next to, and in the next highest numbered seat from, Olivia," would require mirroring. A rule that said, "Ingrid sits immediately next to Olivia," would allow the two be on "either side" of each other and therefore not require mirroring.

Thinking on the October 2003 game, what would the basic mirrored scenarios look like? The way that I did it was that I kept the F/G placement in a constant/opposite-to-each-other position, and then shifted around the OI block to get four scenarios. Thinking in numerical terms, I kept F in 1 and G at 5. And then had the OI block at (2,3), (3,4), (6,7), and (7,8). But these scenario set ups don't exactly seem to be mirroring one another? I guess I am wondering what it means to have a mirrored set up in this game? I can imagine the mirroring in the June 1991 game, but the October 2003 seems harder to visualize. Thanks for your help!!

I'll offer the way I deal with the "mirroring" aspect of the OI-block in this particular game. Basically, I diagram that as a block from left to right, but, because the game is a circle, "left" and "right" are ambiguous. So I also label the block with a little symbol indicating that "left to right" in a block really means "what is on the right side of this block is further along clockwise than what's on the left side of this block".

I'm hoping I can attach my diagram and you can see it! 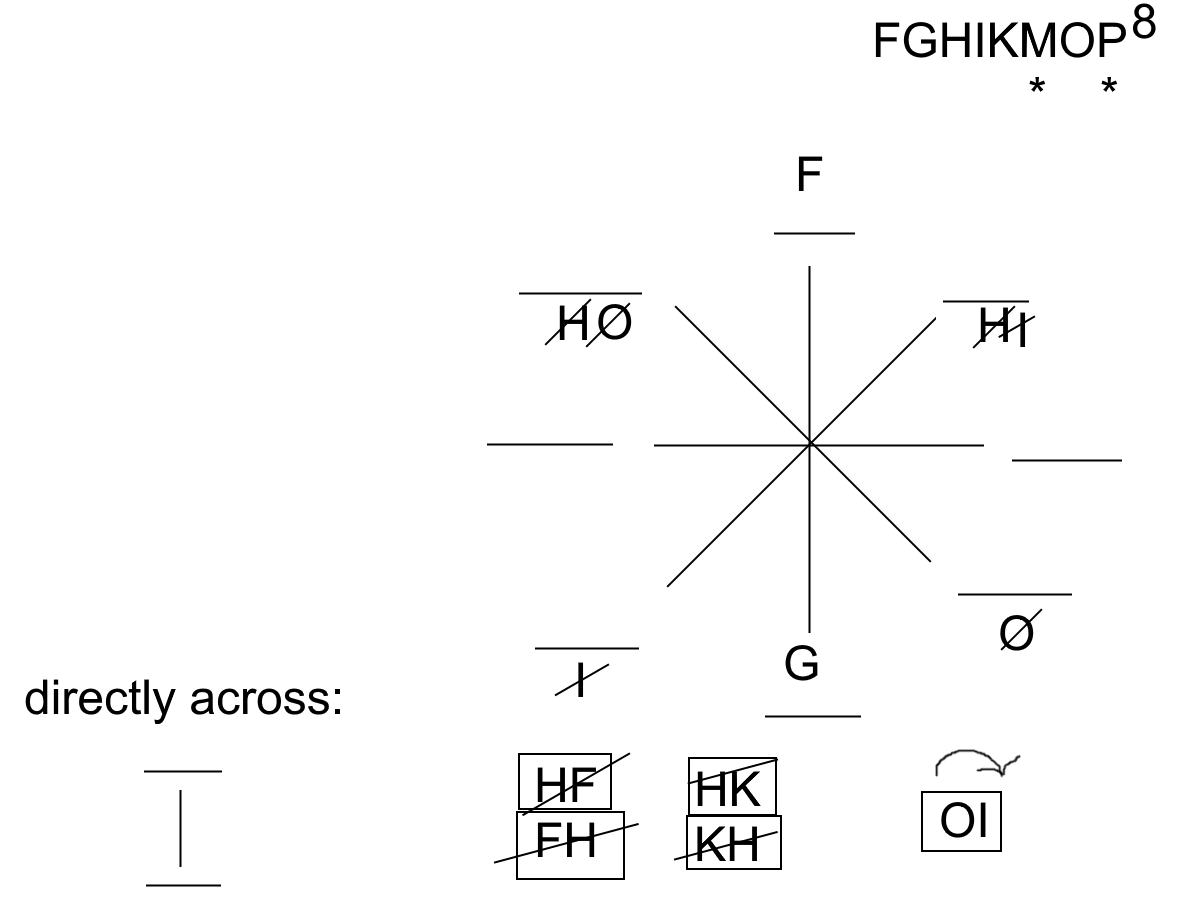