The correct answer choice is (D)

As with Question #9, it is best to consider the conditions in this Local questions one at a time:

june07_game_2_#10_diagram_1.png (6.45 KiB) Viewed 1657 times
Next, we are asked to show H exactly twice, and G – exactly once. We know that H must be the
last film shown on Thursday, but not whether the second showing of H would occur on Friday or
Saturday. Either seems possible, warranting the creation of two local diagrams:

If the second H is shown on Friday, then G must be shown on Saturday in compliance with the
third rule. The local condition requires only one showing of G, which is why G cannot be shown
on Thursday. Thus, the assignment of films to each of the three days is completely defined: 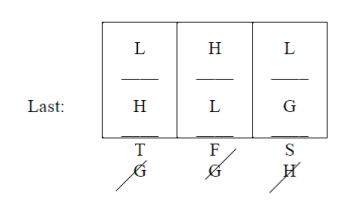 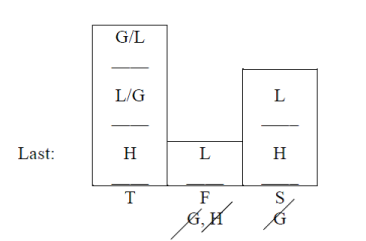 june07_game_2_#10_diagram_3.png (11.04 KiB) Viewed 1657 times
With these two solutions in place, we can say with confidence that either G or L must the first
film shown on Thursday, proving that answer choice (D) contains a complete and accurate list of
these films.