This is a Grouping: Defined-Fixed, Unbalanced: Overloaded game.

This is a very challenging game. The first indication of difficulty is the Subdivided selection pool—the researchers are either anthropologists or linguists. The second source of difficulty is that there are six researchers selected, but seven available researchers, leading to an Unbalanced scenario. Finally, the fact that each team includes at least one anthropologist and at least one linguist further adds to the information you must track.

The initial scenario appears as follows:

The first two rules establish negative grouping rules, which will be shown as vertical not-blocks:

O97_Game_#3_setup_diagram 3.png (2.51 KiB) Viewed 1646 times
Because M appears in both blocks, the researchers that can be included with M are limited. Because M is an anthropologist, and each team must have an anthropologist and a linguist, if M is included on a team, then N or O must also be included the same team (because R and S are unavailable):


The information derived so far can be added together to create the final diagram: 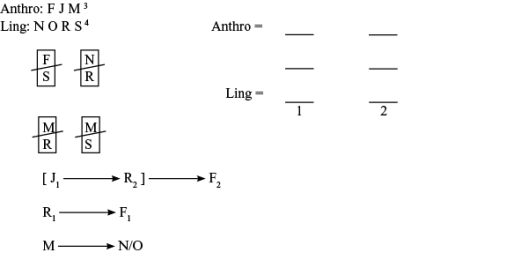 This game took me quiet some time and I am thinking it is because of my setup.

Below I had the board with group 1 and group 2 with 3 spaces each and one space off to the side to remind myself that somebody would have to be out. I couldn't think of any inferences to add so I moved on to the questions. Are there key inferences to this game that I missed?

Your approach sounds spot-on. There are too many possible diagrams in this game to sketch out possibilities up front. Once you have a clear understanding of the rules, it's best just to jump into the questions for this game.

In open-ended games like this one, many questions will provide an additional rule which you can then use to sketch out diagrams.

When you have a two-value system, with only two options for each variable the contrapositives can be expressed more powerfully by saying where a variable is instead of where it is not. If, for example, the game had all 7 variables placed on the teams, then if we knew that R was not on Team 2 it would have to be on Team 1, and instead of saying "R is not on Team 2" we would express it in the positive form, "R is on Team 1". But just because this is not a two-value systems like that doesn't mean we can't use the contrapositive. Always be aware of it and consider its ramifications, even if you decide not to diagram it in your setup.
Adam M. Tyson
PowerScore LSAT, GRE, ACT and SAT Instructor
Follow me on Twitter at https://twitter.com/LSATadam

As you correctly deduced, since each team needs at least one anthropologist, the inclusion of S to a team would rule out both F and M, and therefore require J to join the team.

In the classic words of the narrator to my favorite childhood tv show, Where in the World is Carmen San Diego, "good going, gumshoe!"

RS
where you could either have MS or MR as a pairing/block but not RS.

MS or MR
where RS could be a pairing but neither MR nor MS could be used as a pairing/block.

What is it in the phrasing that indicates this?

If I say "I will have neither steak nor chicken for dinner," I'm not saying I might have steak or chicken but not both. I'm saying I won't have either one. The same principle applies to this rule, and to any others you see like it.

Remember that rule: "neither...nor" means "not this AND not that." Both must be out!
Adam M. Tyson
PowerScore LSAT, GRE, ACT and SAT Instructor
Follow me on Twitter at https://twitter.com/LSATadam