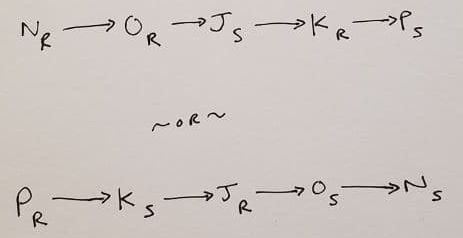 You could use the chains, but I think it's more straightforward to use the original set up to look at what rules force doctors in S, and avoid those sufficient conditions.

To start with, I'd look at the rules that say J(r)

Of those two, I'd start with seeing what happens if I put J(s) or P(s) so as not to trigger either sufficient condition. We know if J(s)

From there, we don't have any more rules that have (s) as a requirement. So we just have to look at the two rules we have, and see how to minimize the number of doctors in (s).

No matter where we put J, someone is in (s). Either J is in r, putting O in s, or we put J directly in s. That's one doctor.

So no matter what, our minimum here is going to be two doctors in s---J and P. You might think that the Os overlap, and you could do something with those, but as it turns out, if N is in r, O has to be as well, so we want to avoid a situation with O in s. Otherwise we would have to bring N along with O to s, and we'd have three doctors there.

In summary, our minimum is 2. We can't get any lower than that under the rules.

powerscoreQasker
Wed Mar 10, 2021 6:30 pm | Post #3
-  Wed Mar 10, 2021 6:30 pm #85225
Thanks for spelling out that process! That sounds like an efficient version of the messy process I went through when I attacked the problem. On the other hand, if you can just look at the chains and determine the minimum at Souderton from that, wouldn't that be faster than reasoning through each of the rules that has a doctor in S as a necessary condition? Or would looking at the top chain and seeing J(s) and P(s) not actually prove that that's the minimum?

I think you could use your chain to find a potential minimum, but I would not just draw a chain and assume that was the minimum. You want to think if you can get it any smaller than that chain before moving on.

powerscoreQasker
Fri Mar 19, 2021 10:31 pm | Post #5
-  Fri Mar 19, 2021 10:31 pm #85707
Thanks for answering - that makes sense. Just to summarize, to make sure I'm understanding this correctly: the chains could indicate a possible number, but it wouldn't necessarily be the minimum. That is, since the top chain has 2 doctors at Souerton, in this question I could eliminate answer choices that stated 3 or 4 as the minimum number of doctors at Souderton, but I'd want to keep exploring to see if 2 is truly the minimum. And the best way to find out the minimum would be to use the conditional rules themselves, rather than counting the items on the chain.

When you're looking at the chains you created as a means to find the minimum, you can use the chains as a starting point, but you also have to consider any variables not included in those chains. So, your top chain shows two doctors at S, but your top chain doesn't include the variable L. So, I'd just check the rules to make sure that, in that scenario, there would be no reason I'd have to put L at S. You wouldn't have to in that top chain scenario, so your top chain then shows you (once you consider L) that 2 is a possible number of doctors at S.

But that's only one possibility, so you then have to consider whether there's any other way to get just 1 doctor at S. If you're going to have just one doctor at S, it can't be J, K, or O. That's because, as your chains show, those three doctors being at S will always give you at least one more doctor at S. So you'd have to think quickly about N, L, and P.

So now we know that 2 at S really is the minimum.