I appreciate your input. I have a follow up question.

I understand the first rule to imply that we must have one of either L or S, but we cannot have both. In my opinion, once we get to the point in the hypothetical of question 15 where L cannot be offered, which triggers that M cannot be offered, and since we must require S, for the reason of rule 1 it follows that P must be offered and Z cannot be offered. Perhaps a diagram will give a better visualization to these thoughts:

Am I misunderstanding a concept of the first rule, and how it applies, seems it may be that I am experiencing the thought of connecting:

since, I think that is applying the contrapositive of the first rule, is there no contrapositive because of the exception with (but not both).
Last edited by T.B.Justin on Mon Feb 11, 2019 5:21 pm, edited 3 times in total.

"I understand the first rule to imply that we must have one of L or S, but we cannot have both. "

That is partly correct, but off in an important sense. That restriction regarding L and S isn't an automatic guarantee for the game, but rather it's a limitation that becomes activated IF Mathematics is selected, which provides a very important distinction.

I think you also may have gotten twisted in your last reply by accidentally switch L for S, so I want to provide clarity in case that slip may be frustrating things even further.

When #15 drops History, we then know that Geography and subsequently Literature cannot be taken. However, removing Literature from the schedule has no impact on Sociology, as we don't have to worry about selecting exactly one of the two unless we know that Mathematics has been taken.

I hope that helps, but let me know if any part is still sticky and I'm here to keep truckin' with you!

Since your post was edited I'd like to respond again so the thread feels cohesive for any future student who may be stuck here, which considering this game, I'd say that's a likely scenario.

It looks like you're still stuck on the consequences of the first rule and its contrapositive, so I'm gonna take one more crack at cleaning it up and hopefully helping it all click!

I wrote in my first reply in this thread of a shortcut style diagram I personally use for a situation such as this within a grouping game, but for added emphasis I'll try again with an analogy to boot for further clarification.

Let's say that a rule says this: To be elected president, a candidate must either be a Democrat or a Republican, but not both.

This has a similar/identical structure to the rule in question here, which states: "If mathematics is offered, then either literature or sociology (but not both) is offered."

This means that to be president you must be one party or the other, and you cannot be both or zero of the two.

Conditionally, my shortcut would look like: P --> D/R, which to me signifies that if P is selected, exactly ONE of D or R must be selected. (I'd put the D/R in a box if I had a pencil rather than a keyboard to do so).
The contrapositive would look like: ~D/R --> ~P, which means that if someone is NOT exactly one of those conditions (either they are of neither party or somehow both) then that person could not possibly be president.

That implies that there is no deduction I can force about someone who I know is not a Democrat, just like there is nothing to deduce about not including Literature into the game. That person can either be a Republican and maybe still be president, or can be neither of the two. Similarly, in this game, knowing that L is not selected leaves the door open for both Math and Sociology to be selected, or neither of the two.

So, to make a long and hopefully helpful story short, ~L --> ~M is not a valid deduction, much like ~Democrat --> ~President would not be.

(Just to make sure it's clear, I don't have the function to strike out variables in this forum so I use (~) to symbolize 'NOT' )

Does that clear it up?

Somewhat, it is getting more clear.

So, is this the contrapositive of that first rule:

Not M
Not S

And since, we know that in circling back to question 15, we do not know if M is selected or not selected, we cannot apply the first rule.

This diagram is a bit intense but accurate, so let's see if this helps.

That is meant to imply that if M is selected, one of L/S will be in and one will be out, so a total of ONE of L or S must be selected. The opposite of 1 in this case is either 0 or 2, so if either ZERO or TWO of L/S are selected, M cannot be selected.

What you had drawn was simply that ~L or ~S --> ~M, which is an incorrect deduction, since for example if we don't have L, we could still very well have M as long as S follows, and vice versa.


This is a nasty point, did this new lap through help at all to clear it up? 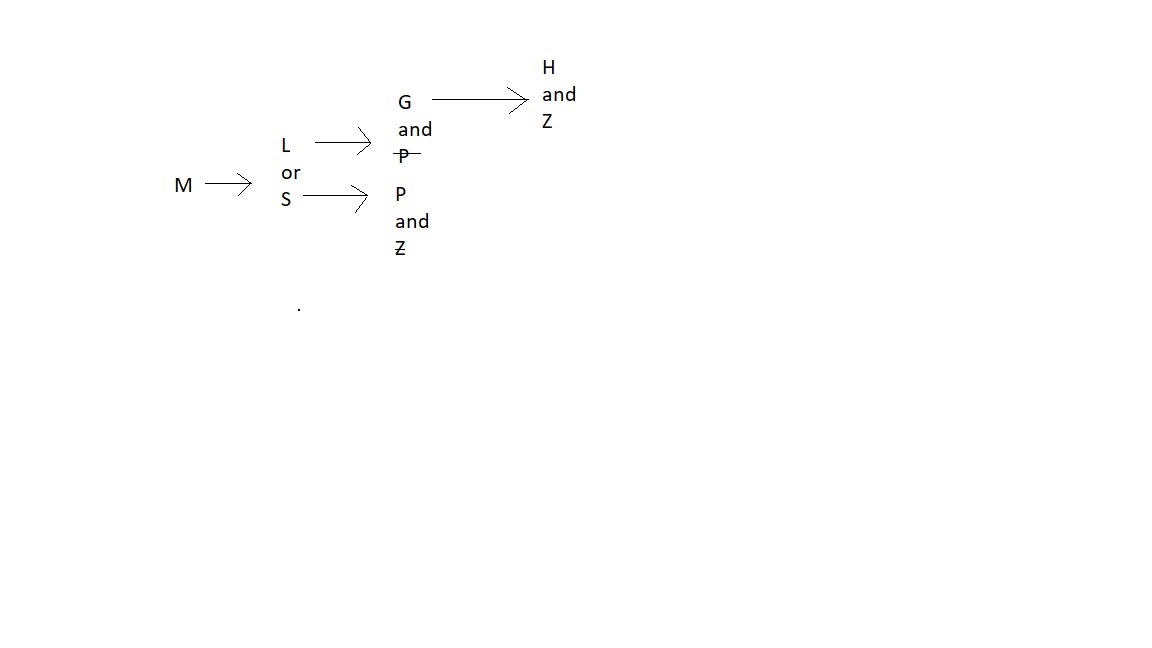 Wed Jun 24, 2020 1:15 am | Post #17
-  Wed Jun 24, 2020 1:15 am #76472
We have had some spirited discussions about this among ourselves, Caroline, and there are pros and cons to both approaches. I am personally in the camp of "connect the rules as you go, as much as you can, and create one master chain from the start rather than wasting time writing them out separately," as you did here. Your diagram is exactly how I would do this game, although I would also add a few inferences off to the side, such as:

You could also add the double-not-arrows for L and P and for S and Z, although I think the main diagram already makes those clear. The two above are less clear at first glance because to find them you have to go through a third variable in each case (S and G cannot go together because they disagree about Z, and L and S cannot go together because they disagree about P).

There is some merit to listing the rules on their own and then connecting them, as discussed above in this thread, but I like your approach.
Adam M. Tyson
PowerScore LSAT, GRE, ACT and SAT Instructor
Follow me on Twitter at https://twitter.com/LSATadam

not Z. Is this diagramming still correct, or should I be diagramming it together (e.g. Rule 2 would be L

From a logical perspective, your diagramming of rules 2 and 3 is not wrong and wouldn't lead you to make any mistakes in the game.

But, the diagramming we're showing here is, in our judgment, more powerful and efficient. You gain efficiency by not having more rules to track (i.e. you're only diagramming the L and the S once instead of twice; that's an efficiency gain both in diagramming and when it comes to having to review the rules to respond to individual questions). You gain power by having the opportunity to combine each rule into a "master chain" like the one you see in Caroline's post above. That comprehensive picture of the game can clean up the diagram significantly and represent the available possibilities for the game (again) efficiently.

So, bottom line, if you feel more comfortable splitting those rules off as you have, that's fine. But just be aware there could be a more efficient and powerful way to represent the setup.