This is a Grouping: Defined-Fixed, Unbalanced: Underfunded game.

This game marks an increase in difficulty in this section, primarily because this game is not as clean as the prior two.


The six meetings might initially appear to have a sense of order, but as it turns out, the Fall/Spring Groups are key, and the Linear aspect is not relevant. Thus, those two semester groups can be selected as the base, and the diagram can be represented vertically or horizontally. Here's the setup appearing vertically:

Note that, with only five city options and six spaces to fill, there is a 2-1-1-1-1 distribution of cities to spaces, and thus one of the cities will appear twice. Every other city will only appear once.

Let's take a moment to analyze the effects of that last point. Since every city must appear at least once, as soon as you know the the three cities in either semester (and thus that semester is filled), you automatically know two of the cities in the other semester. So, for example, let's say you knew that H, M, and O hosted in the fall; because T and V must also host, they must automatically be two of the cities in the spring. This is quite powerful when making hypotheticals in this game, and helps solve questions like #15 and #17 (where knowing 2 of the 3 then leads to a limited number of solutions).


With the base diagram in place, let's analyze the rules individually. Afterwards, we will dive into some of the interactions that lead to inferences:

The rules are fairly straightforward to represent (aside from the tricky non-two-value system), and at this point in the game you can either proceed directly to the questions, or you can consider templates. Templates could be built around the variations on satisfying M and V rule, or on the variations of what occurs with placing the H and V from the first two rules. The former approach is fairly time-consuming and rather open, and thus doesn't strike us as the best use of time. The second approach is more useful since some of the templates fill in almost completely, and is a reasonable choice for those who take it. In this case, we chose not to use the Template approach, but it is defensible; it comes down to the approach you prefer.
Dave Killoran
PowerScore Test Preparation

Here's one possible setup with templates: 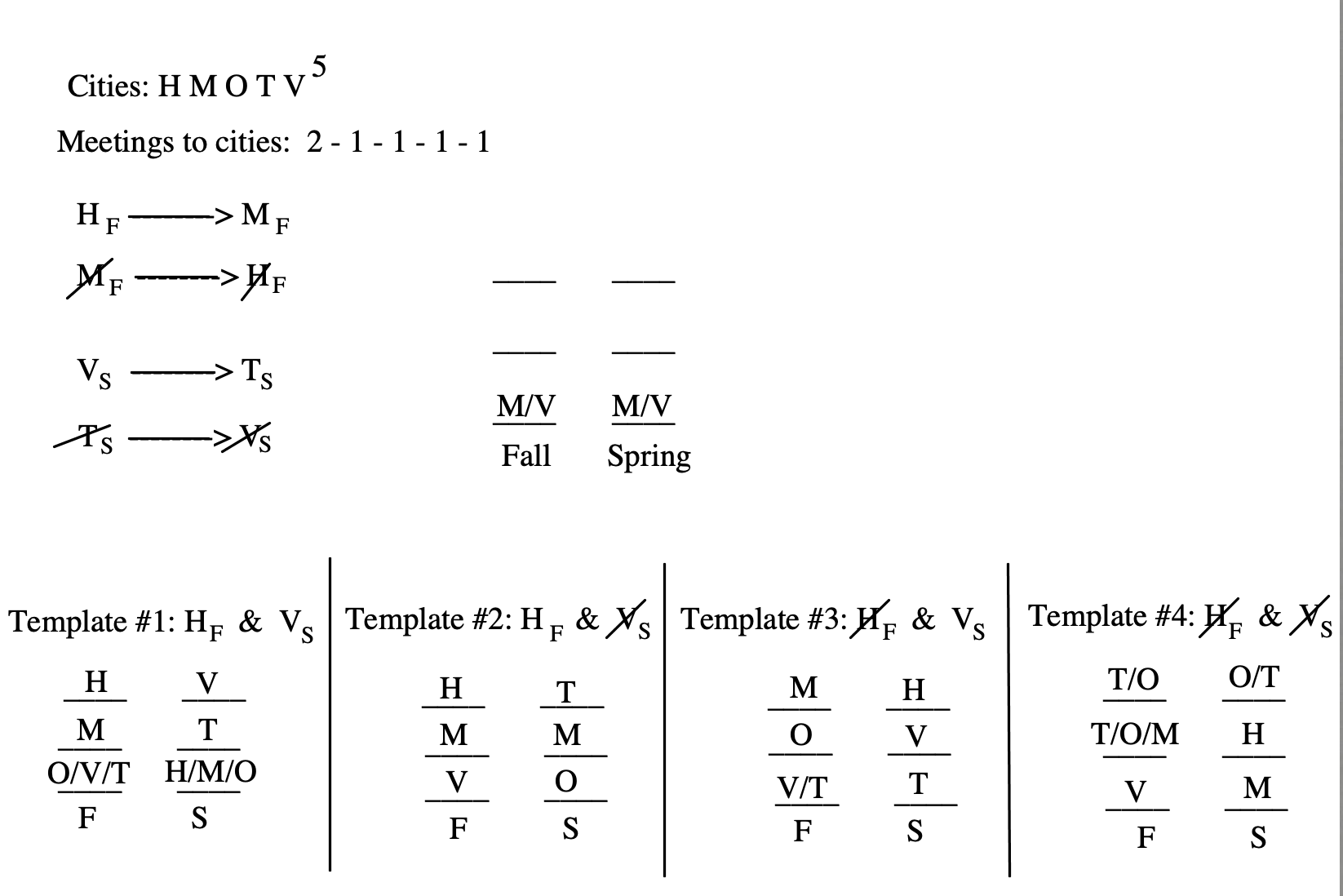 because M not fall means M spring since M has to go in either spring or fall and if it's not in fall then it must be in spring?

And T not Spring means T fall because if it's not in spring it must be in fall?

Dave also talks about that in our podcast on this topic, found here:

(the discussion of the conditional rules in this game begins at around the 1:09:00 mark)

In short, M being in the Spring does not prove H is in the Spring, because M could be in the Spring AND in the Fall. One variable has to be in both seasons! So stick with the basic negation approach to the contrapositives here, as shown in our setup. If M is NOT in the Fall, H is also NOT in the Fall (and they would therefore both have to be in the Spring ONLY). Tricky stuff if you aren't careful about it!
Adam M. Tyson
PowerScore LSAT, GRE, ACT and SAT Instructor
Follow me on Twitter at https://twitter.com/LSATadam


After reviewing, I wondered if the setup above was incomplete, and whether I would need to make 4 templates like this:


I guess I am wondering if the first 2-template setup would be incomplete? I figured that since I left open the possibility that I could tack an additional M or V in either group and since I knew that I had to include at least 1 of both M and V in the whole thing, these 2 templates were exhaustive. However, I am not sure if I am misunderstanding the MV rule. Thanks so much for your help!

Mon Feb 01, 2021 6:19 pm | Post #7
-  Mon Feb 01, 2021 6:19 pm #83714
Those first two templates would be incomplete in my view. Although you could say that they each include the idea that M or V could be in both seasons, that means they are almost useless, because you cannot take them further to make additional inferences. If you're going to do templates for this game, it would be better to do as you did later and consider those first two as being cases where each of M and V are only used once.

Templates are good when the game is restricted enough that there are only two or three possible starting positions, often based on a single rule or combination of rules that splits the game in two. I probably wouldn't do templates on this game myself, because there isn't anything about it that jumps out as having that kind of impact on the game. As much as I love doing templates, sometimes they just aren't worth the effort!
Adam M. Tyson
PowerScore LSAT, GRE, ACT and SAT Instructor
Follow me on Twitter at https://twitter.com/LSATadam

Thus, when H is in the Fall and V is NOT in the Spring, M is forced to be in both seasons, and every other variable must appear only once. If H were to repeat, we would either break one of those rules about M, or else we would have two variables repeating and one variable would be out of the game, which is not allowed by the 2-1-1-1-1 distribution.

V in the Spring relieves that pressure on M to be there, so the constraints are not quite the same, and V CAN be the one that repeats!
Adam M. Tyson
PowerScore LSAT, GRE, ACT and SAT Instructor
Follow me on Twitter at https://twitter.com/LSATadam